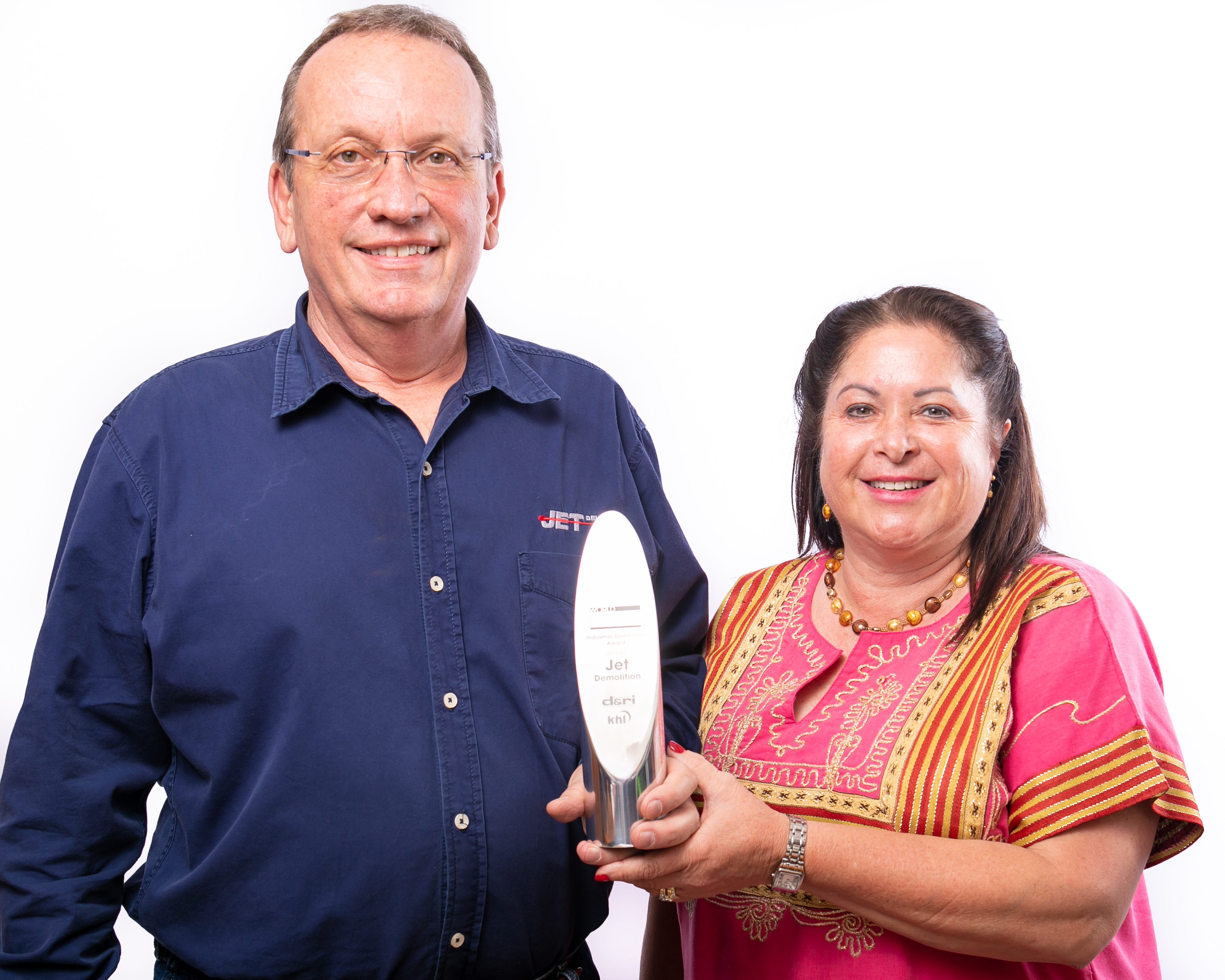 26 November 2018: The journey to the World Demolition Awards 2018 at the Aviva Stadium in Dublin on 8 November has been a long one for husband-and-wife team Joe and Liz Brinkmann. However, clinching the coveted Industrial Demolition Award, its second consecutive win at this prestigious annual event, is vindication of their lifelong commitment to and vision for the company.

The two met at the Missouri School of Science and Technology in the US, where Joe was pursuing mining engineering and Liz metallurgical engineering. “I have been involved with explosives since my final year at university in the 1980s, which is when I became hooked on it. It has been my passion for 38 years to date,” Joe adds.

Liz recounts that the young pair came to South Africa with the initial intention of entering academia, after engaging with professors at a local conference. Joe was employed by the Chamber of Mines at that time, while Liz pursued her Master’s degree at the University of the Witwatersrand. “We eventually decided that academia was not for us.”

This resulted in Joe establishing a blasting consultancy company in 1989, following various patents for shaped explosive charges, and culminating in its first blasting project in 1991. Jet Demolition itself was established in 1994, with the name and logo derived from the jet action produced by these devices. “Our logo is a shaped explosive charge shooting a jet through our company name.”

Highly successful in the demolition of all types of steel and concrete structures, the so-called HammerJet range of charges soon attracted the attention of mining conglomerate Anglo American, which approached Jet Demolition for an ambitious project at a gold and uranium plant in Welkom in the Free State in 1993. The fledgling company took this major project in its stride, which began an illustrious legacy of turnkey contracting work, which continues to this day.

Joe is particularly proud of the Welkom project, as it showcased what has since become a unique selling point for Jet Demolition: its turnkey service proposition. “We carried out all of the work from when the plant was switched off to when it was rehabilitated and revegetated. We recovered the reusable assets and scrap, demolished everything, terminated all of the services, and decommissioned the site. Then we recovered all of the gold that was locked up in the site. We even remediated all of the radiological hazards that were present.”

Liz explains that she finally joined her husband at Jet Demolition in 1996. “It was a challenging time to start a company, especially as were now both reliant on it for our incomes. However, it was equally exciting, as we managed to exploit a specialist niche in the market.”

Joe continues the story: “It was one of those things that grew very quickly. Again, our strength is our long-term vision, our strong technical base, and our unwavering commitment to the future of the company. It is very tempting to go out and buy a Lamborghini with the money it takes to buy a single excavator. We have 32 excavators in our fleet at present.”

While Joe sees this as essential equipment, he stresses that it has taken a considerable investment to both sustain and grow the company over the years. “In order to be able to meet the high levels of safety and quality, you have to mechanise.” Due to the experience and diversity it has accumulated over the years, Jet Demolition is in the unique position of being able to undertake a full scope of mechanical and explosive work.

“Very few companies such as ours have an in-house blasting capability, and invariably outsource this to a specialist. Not only do we have all our own equipment, but we do all of the work ourselves, which places us in a very strong position.” Added to this is the fact that Jet Demolition also develops and manufactures its own specialised tools.

“We have an excavator attachment in the form of a large shear that functions like a pair of scissors to demolish any building in South Africa. We also have special high-reach machines that can extend up to 35 m or 12 storeys, which obviates the safety risk of having workers on a structure itself,” Joe points out.

Looking to the future, Joe sees two areas of expansion for the company. One is extending its geographical footprint, while the other is diversifying into related industrial services. The latter includes turnkey furnace projects, which involved both demolition and rebuilding work. “Essentially we are looking at related heavy industrial processes where we take out sections of a plant, and are also involved in the rebuilding, so once again the focus is a turnkey service.”

In terms of expanding beyond the industrial base in Africa, Joe reveals that Jet Demolition has even received enquiries as far afield as India and the Middle East, and has quoted on work in South America. “While Africa remains our key focus, we are looking to work in the developing world. To attempt to enter First World markets is not viable, as these are already serviced by established international players. Where we want to go are those areas where there is a lack of such specialist services.” Joe highlights that Jet Demolition even carried out work for the United Nations Development Programme (UNDP) following the catastrophic Boxing Day tsunami in Banda Aceh in 2004.

Jet Demolition’s latest accolade at the World Demolition Awards is vindication of this strategy. “We are always in pursuit of excellence. We have to do it well, efficiently, and safely, and to the highest standards of quality. We have to have happy customers, and you achieve that by doing good work, and by doing it safely. Yes, this award certainly vindicates all of our effort over the years. It is not something that comes quick and easy. It is a long-term process. So to build up to where we are now has taken a very long time. Liz and I have committed our lives to this business,” Joe concludes.